Due to the current ongoing situation with Covid-19, we are reducing office opening hours. The office will now be open from 9am until 2pm.

If you have any queries outside of these hours, please leave us a message on the answerphone, or email enquiries@acuityfinancial.co.uk, and we will respond as soon as possible.

We hope all our clients are keeping safe and well during these unprecedented times.

We are pleased to announce that we are supporting the Alrewas Show this Saturday, 20th July. Get yourself down there and show your support. There are a wide variety of activities and shows on offer, and it is sure to be a great day for all. 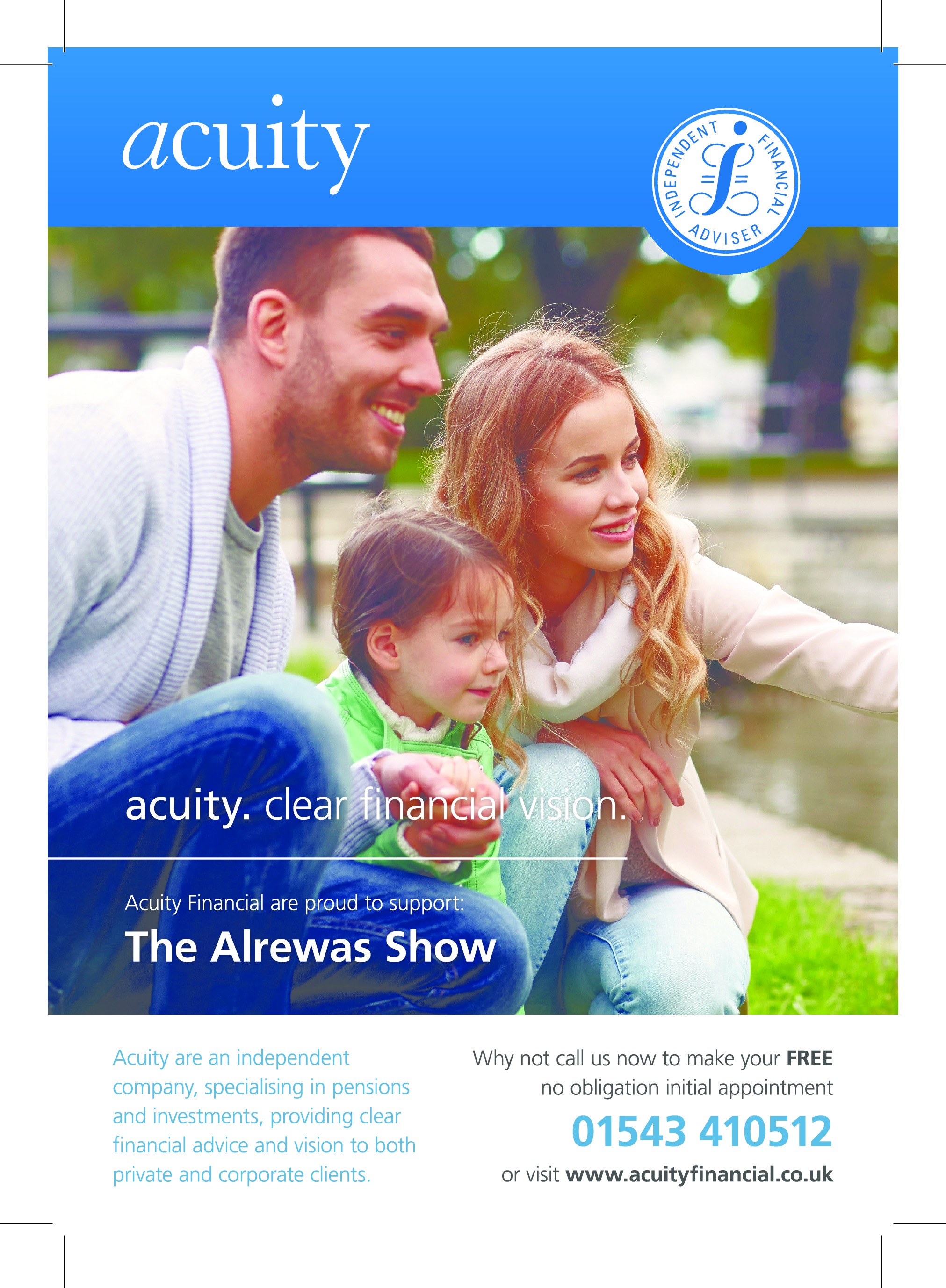 A company which offered ISAs and bonds online, has gone bust owing £237 million to over 11,000 people.  These bonds and ISAs were advertised online on a comparison site and tempted investors by indicating a return of 8% per year. The serious Fraud Office are now investigating.

An 8% return on a low risk investment seemed too good to be true, and one of our clients called us to ask if he should invest some of his funds into this product. We advised him that the investment he was considering was extremely high risk and he could potentially lose his entire fund, he hadn’t considered this and decided against the investment.

By contacting us our client saved a large amount of his capital as he could have lost all of his investment and would have been one of the 11,000 plus people now out of pocket.

If you are considering investing funds then please have a chat with an adviser as they could save you from a costly mistake!

We have now moved offices! Our new office address and telephone number is:

Please note, if you are visiting our offices, there is a small car park at the office for you to park in if there is space. If there are no spaces available, please use the Lombard Street short stay car park and we will cover the cost of this for the duration of your meeting.

There are still some fixed rate mortgages on the market with rates currently below 2%. This is likely to change if the Bank of England rate is increased.

If you are currently on a variable rate mortgage now may be the ideal time to look at re-mortgaging to secure a fixed rate to protect against any possible rate rises. If you would like us to take a look at this for you, please get in touch on 01543 440300, or email us at enquiries@acuityfinancial.co.uk.

It’s no secret that the cost of the “University Experience” is now higher than it has ever been. According to The Guardian, the average cost of a degree per child is now around the £85,000 mark, and it is Parents and Grandparents who are playing an increasingly significant role in funding this. The estimated cost of studying in England is £22,189 over a 39-week year, and typical students (whose parents have an average household income) only receive £14,370 in loans and grants, meaning they (or you) need to make up a surplus of £7,819 on average, or £651 a month!

A lot of the older generation have money available to help, but it is locked away in pensions which cannot be accessed. Pension regulations now allow for income to be taken flexibly, on an as and when basis if needed, and this gives Parents and Grandparents the ability to help out the younger generation in paying for their university life, as well as have flexibility on how they take their own income. Let’s not forget that it is not only tuition fees that need to be paid, but books need buying, bills need paying and of course, social lives need funding.

If, on the other hand, you are a younger parent and are now worrying about how you will fund your child’s future education, that is also something we can help you with. Savings Plans and Investment ISA’s are now more important than ever, and they are something which we can look at setting up for you. With the limit on how much you can pay into an ISA now £20,000 per tax year, we can help you to maximise your saving potential for your children’s futures.

If you are in a position where you think that you can help out your Grandchildren or Children, and want to talk to someone about how you can do this, get in touch with us on 01543 440 300, or drop us an email at enquiries@acuityfinancial.co.uk.

We are proud to be supporting the ongoing Lichfield Festival, which is running at the moment until this coming Sunday, 14th July. With a number of events still to come in the following few days, it is sure to continue to be one of the highlights of the summer for this wonderful city.

While your at it, why not give us a visit. We can take a look at your Pensions, Investments or even help you secure a better rate on your mortgage! Give us a call on 01543 440300 or drop us an email at enquiries@acuityfinancial.co.uk to book an appointment whilst you are here at the Festival!

The government has today announced that the predicted rise of the state pension age to 68 will now happen in 2037, 7 years earlier than was planned.

If you would like to retire earlier, and to have a decent pension in retirement, contact us to get saving, or to make sure your existing pensions are in good order.

Happy Easter To All Our Clients!

We will close for business on Thursday 13th April @ 5pm, and reopen on Tuesday 18th April.

A client approached us as she had received a pre-retirement pack from an old company pension scheme, from a very well known high street name.

This was for a relatively small plan value, and the pension offered was very small, at about only £70 a year. Our client asked if we could arrange for her to draw the whole fund as cash, or alternatively if we could transfer the fund to add to her existing sizeable pension benefits that we manage, as she could not see any value in such a small pension.

We examined the data and came to the view she was right, and it was likely to be in her best interests to draw the fund, as the break even point was so far away into the future she was unlikely to benefit from the pension.

There was quite a sizeable penalty on making a transfer, but not on drawing the funds directly from the scheme, so the latter was clearly preferable. The transfer would only be a last resort as an option.

The retirement paperwork gave options for drawing the fund as a one off payment under the triviality rules, but our client did not qualify to use these as her overall pension savings were too high.

We therefore considered drawing the benefits under the small pot rules, where you can draw plans of up to £10,000 as one off payments. There are various versions of these rules depending on the type of scheme, but they are quite straightforward for occupational schemes.

There was no option for this in the paperwork, so we contacted the scheme administrators to ask for this.

The adminstrators confirmed our understanding that we could use these rules, but they then advised that the scheme have chosen not to adopt the rules that actually allow this. They also advised that they thought the scheme had a lot of members in a similar situation, with small pots, who would probably prefer, or have preferred, to draw the funds as cash.

We thought this stance was worth challenging, as it would actually cost our client quite a sum of money if she transferred her benefits instead, so drafted a letter for her to send to the scheme trustees to ask them to change their stance.

We have today had a reply from the adminstrators to advise our request, together with other data we had provided, was reviewed at the last scheme trustees meeting, and they have chosen to change their stance and will now be adopting the small pot rules, subject to some further processes.

Not only does this mean our client will be better off, but this also opens up this option for other members of the scheme, which could be to the benefit of many members.

Please note though, drawing a cash payment rather than a pension is often not the right choice. Advice is important, as shown by this case, where we were able to provide an option our client would have not known was even available.

Call us now Scroll to top